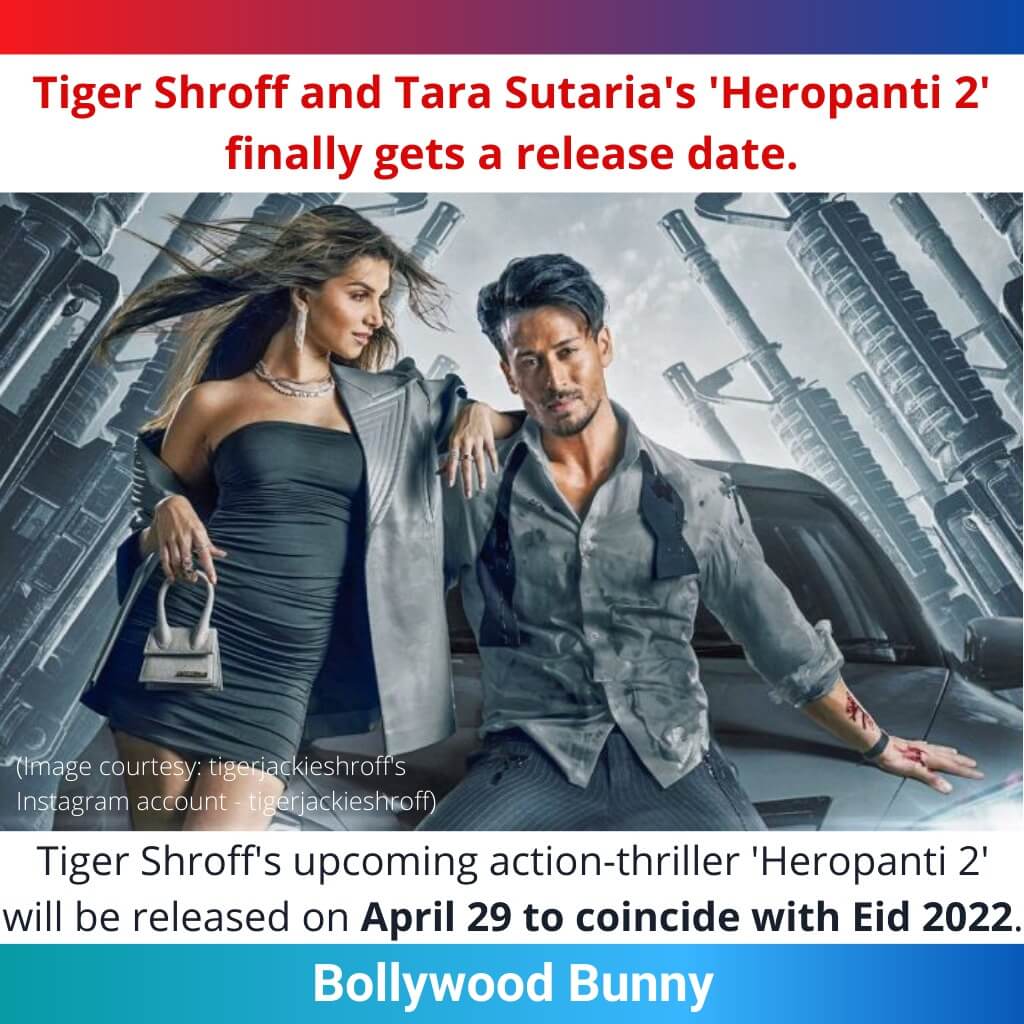 Tiger Shroff’s upcoming action-thriller ‘Heropanti 2‘ will be released on April 29 to coincide with Eid 2022.

The makers of the most anticipated film, ‘Heropanti 2‘, featuring Tiger Shroff and Tara Sutaria in prominent roles, have announced a new release date on the auspicious occasion of Eid on April 29, 2022.

Heropanti is the film that gave Bollywood one of its best action stars. Tiger Shroff earned a hero’s welcome from the audience and was warmly welcomed into the industry. Since then, his movement and dance have been the buzz of the town.

Since the announcement of the Heropanti sequel, fans have been eagerly anticipating further details about the project. We’ve already seen the first look of the film. Fans reacted positively to it. With the unveiling of the latest poster, the movie’s release date has finally been confirmed.

To add the excitement, the filmmakers have released a new, action-packed poster for the film, which features Tiger Shroff and Tara, and both are full of action and swag in equal proportion!

Tiger Shroff’s new poster for ‘Heropanti 2’ has been out.

The new poster of ‘Heropanti 2’ features Tiger Shroff in a wounded, rustic avatar with the stunning Tara by his side, and it’s all about guns and glory. The film is a sequel to Tiger and Kriti Sanon’s 2014 first movie ‘Heropanti,’ and is expected to be Tiger’s first Eid release. In February 2020, the first look of ‘Heropanti 2’ was released.

‘Heropanti 2’ will be directed by Ahmed Khan, who also helmed Tiger’s last film, ‘Baaghi 3’. It was written by Rajat Arora and featured music by A R Rahman. On the auspicious occasion of Eid, the film will be released in theatres on April 29, 2022.

The film promises multiple times actions and two times as much fun. These posters have certainly sparked fans’ interest, and we eagerly await the teaser and trailer for Heropanti 2.

Bollywood Bunny will keep you updated on the latest entertainment news.