Home » Blog » Who Is The Youngest Actress In Bollywood? 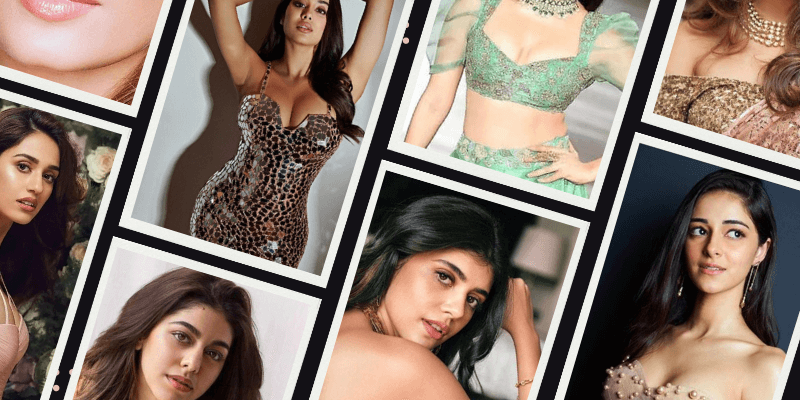 Bollywood is more popular than other film industries in the country. New talents have been introduced occasionally, and they have proven their worth as field performers. Bollywood has given us some of the industry’s most stunning and talented young women. A few Bollywood actresses who began their acting career at a young age are highly skilled in acting, fashion sense, and the ability to elevate their personality.

Take A Look At The Youngest Actresses In Bollywood

Youngest Actresses In Bollywood have worked hard to get to where they are now. So, here are some of the most recent Bollywood actresses who are making a name for themselves.

Anaya Pandey has steadily improved since entering the industry. The 22-year-old started her career in 2019 with Dharma Productions’ Student of the Year 2, for which she won the Filmfare Best Debut Award. She has since appeared in the romantic comedies Pati Patni Aur Woh and Khaali Peehli with Ishaan Khattar. She will appear in Shakun Batra’s next film.

Not only that, but she’s one of the most active stars on social media, and she’s even started a campaign called So Positive to raise awareness about online bullying and foster a positive community.

Saiee Manjrekar was born on August 29, 1998, in Mumbai. Her father is a Marathi actor and director, Mahesh Manjrekar. She made her Bollywood debut in the film Dabangg 3 as Chulbul Pandey’s love interest (Salman Khan). She appeared in the films Ghani (2021) and Major (2022).

She co-stars with Adivi Sesh and Shobhita Dhulipala in the upcoming film “Major.”

Alaya Furniturewala is the granddaughter of famous actor Kabir Bedi and the daughter of actress Pooja Bedi. She was born on November 28, 1997. Alaya has already proven her acting abilities despite appearing in only one film. Alaya first appeared in Jawaani Jaaneman, a film starring Saif Ali Khan and Tabu. The film was released on the OTT platform to positive reviews; after all, who doesn’t enjoy a light-hearted comedy?

Alaya F, the gorgeous and beautiful youngest actress in Bollywood won the Filmfare Award for Best Female Debut, and she’ll be seen in Freddy alongside Kartik Aaryan.

Janhvi Kapoor, the late actress Sridevi Kapoor’s daughter. Boney Kapoor, her father, is a producer. Her age is 23 years. She made her acting debut in Shashank Khaitan’s love drama Dhadak in 2018, alongside Ishaan Khattar. Roohi, Gunjan Saxena: The Kargil Girl, and Ghost Stories are among her other films. The star kid will appear in the sequel to the popular rom-com Dostana. Janhvi received much attention for her impeccable fashion sense even before making her Bollywood debut.

She knows how to turn heads in her airport gowns, gym attire, and party attire.

Why shouldn’t Manushi be an inspiration to so many people? She has accomplished so much at such a young age. The 24-year-old won Femina Miss India 2017 before representing the country at the Miss World pageant, which she won at the age of 20. During her journey, she helped several important causes, including raising awareness about World Menstrual Hygiene Day and expanding Project Shakti, an HIV/AIDS awareness initiative.

Manushi will make her Bollywood debut alongside Akshay Kumar and Sanjay Dutt. It is described as a historical drama.

Sanjana Sanghi’s career as a child artist began with Imtiaz Ali’s masterpiece, Rockstar, in which she plays Mandy Kaul, the younger sister of Heer (Nargis Fakri). She also appeared in the films Hindi Medium and Fukrey Returns in minor roles. She was cast as the leading lady in Mukesh Chabra’s Dil Bechara, a remake of the famous novel and Hollywood film The Fault in Our Stars in 2020. The actress will co-star Aditya Roy Kapur in the upcoming film Om: The Battle Within.

In addition to films, the 24-year-old has appeared in numerous commercials for companies such as Coca-Cola, Cadbury, and Tanishq.

Sara Ali Khan, Bollywood’s youngest actress, has become the talk of the town. Sara Ali Khan is the daughter of famous actor Saif Ali Khan. Her date of birth is August 12, 1995. She made her Bollywood debut in 2018 with the films Kedarnath and Simmba. Her co-star in the film Kedarnath was Sushant Singh Rajput. In 2018, Sara Ali Khan was nominated for a Filmfare Award for Best Female Debut. She was also named to Forbes India’s 2019 Celebrity 100 list.

She is a celebrity brand and product endorser for several companies and products, including Fanta, Puma, and Veet.

Tara Sutaira, an actor, singer, and dancer, began her career at a young age. She began her television career as a young artist on Disney shows. She is also a professional vocalist who has competed in operas and other competitions since she was seven years old. She made her Bollywood debut in Dharma Productions’ Student of the Year 2 alongside Tiger Shroff, Ananya Pandey, and Aditya Seal. She later appeared in Marjaavan as a mute woman alongside Sidharth Malhotra.

Tara will soon appear in Heropanti 2, and Ek Villain Returns.

Despite having only appeared in two films, she is currently the talk of the industry. She touched everyone’s hearts with her performance as Dhoni’s wife in M.S. Dhoni: The Untold Story. Kiara Advani made her acting debut in the 2014 comedy-drama Fugly, which she was born on July 31, 1992. However, she will be remembered as Dhoni’s reel wife.

Disha Patani is one of Bollywood’s hottest young sensations right now, and she’s on her way to big things. She first appeared in a Cadbury commercial, which was well received. She has since appeared in the album Befikra alongside Tiger Shroff. The film that catapulted her into the spotlight was M.S. Dhoni: The Untold Story, in which she plays the legendary Indian cricketer’s first love interest. Her death in the film brought everyone to tears.

She will appear in the upcoming films “Ek Villain Returns” and “Yodha.”

With that, we conclude our list of the top ten youngest actresses in Bollywood. You can also check our actricle about Most Beautiful Actress In Bollywood. It has been exciting to watch their careers develop.