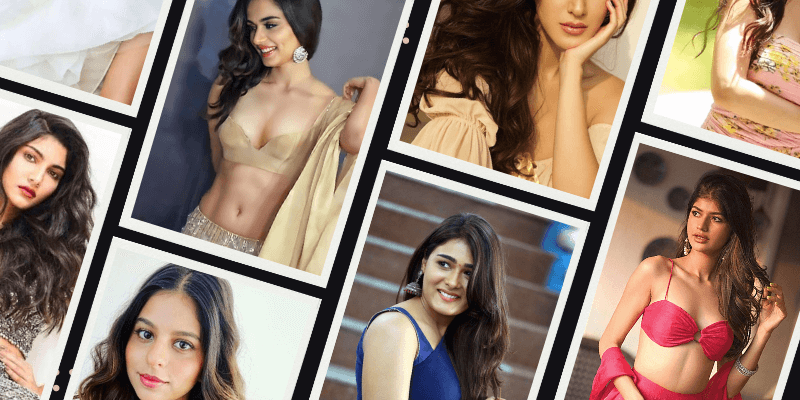 Take A Look At The Most Promising Upcoming Bollywood Actresses

Why bother? Let us continue to look at the latest fresh talent and entrants in the Bollywood film industry. Let’s get started!

This is a well-known name in the film industry. For the past two years, Bollywood fans have been anticipating her debut. Shanaya Kapoor’s debut will take place in 2022, according to recent reports. Shanaya Kapoor, the daughter of Bollywood stars Sanjay Kapoor and Maheep Kapoor, is already well-known on social media for her star-studded personality. She has a large fan base, and they adore her for her stunning appearance, innovative facial features, and toned body structure. In addition, she is well-known for her fashion sense and styling. Shanaya will now make her feature film debut with Dharma Productions.

Suhana Khan is another well-known name that needs no introduction. Suhana Khan, the daughter of King Khan, Shah Rukh Khan, and Gauri Khan, is stunning on the inside and out. Throughout her social media accounts, you’ll find stunning candid photos, style statements, and glammed-up vibes. It’s no secret that she has a huge fan base; we already adore her hot looks! As part of Zoya Akhtar’s Bollywood debut in 2022, Suhana will appear on the big screen for the first time.

The daughter of late Sri Devi Kapoor and sister of Jahnvi Kapoor, Khushi is set to make her Bollywood debut as well. Training and makeovers have been conducted for her upcoming film, the details of which remain unknown. However, industry insiders believe that it will most likely be in 2022. Khushi’s daily life snippets and candid photos are frequently circulated on social media, and she is already well-loved by fans! Given that everyone in her family is a superstar, we’re sure she has good support and advice from them.

If you haven’t heard of this name yet, you may recognize the surname – Dhawan! Varun Dhawan’s niece is Anjini Dhawan. In addition, she is Siddharth Dhawan’s daughter. Although she may not be as popular among fans as others, she recently made a social media sensation with her looks and snippets. There are currently no details on Anjini’s upcoming Bollywood debut, which is expected to take place soon. For the time being, we only know that she enjoys dancing, is a fashionista, and is best friends with Khushi Kapoor.

Salman Khan’s niece, Alizeh Agnihotri, is also set to make her Bollywood debut in 2022! She is one of the star children who will soon become an actress and achieve stardom. Alizeh, the daughter of Atul Agnihotri, is already well-known for her modeling career and stunning appearance. She has even trained and worked with choreographer Saroj Khan and aspires to be a movie star. But isn’t it true that we’re all waiting for her to make her debut?

Can you name a person who hasn’t heard of Manushi Chillar? The diva rose to prominence after winning Miss World in 2017, 17 years after Priyanka Chopra introduced the pageant to India. Manushi is now preparing to make her Yash Raj Productions debut opposite Akshay Kumar. The film, based on Prithviraj Chauhan’s life, is set to hit theaters in 2022. We’ve already seen her stunning beauty and talent in the Miss World competition; now it’s time to see her in action as an actress. Isn’t it exciting?

If you like South Indian movies, you’ve probably heard of or seen Rashmika Mandanna. She has appeared in many successful Kannada, Telugu, and Tamil films and is now preparing to make her Bollywood debut. Rashmika is currently working on a Bollywood project called Mission Majnu, which is set to go into production in 2022.

Katrina Kaif’s younger sister, Isabelle Kaif, is another contemporary who is now into Bollywood. Two projects are already in progress, culminating in her long-awaited debut. Her first film, Time to Dance, co-stars Sooraj Pancholi and is a dance drama; a second film with Ayush Sharma is in the works. Isn’t this a great place to start? She had other projects lined up even before the film was released. Impressive! Her beautiful looks often give us a magical feeling, and we can’t wait to see her on the big screen as a new Hindi actress!

Shalini Pandey, the star of the Telugu film Arjun Reddy, is set to make her Bollywood debut. She gained massive popularity in the movie for her bubbly and adorable looks, and now Shalini is set to become a Bollywood star with Jayeshbhai Jordaar, opposite Ranveer Singh. We can’t wait to see the beauty on the big screen in 2022, and we’re confident she’ll get the same amount of love from Bollywood as she did in her Telugu film!

Palak Tiwari, the daughter of Shweta Tiwari, makes her Bollywood debut. She will debut in the film The Saffron Chapter, starring Vivek Oberoi. The film is a thriller, and Palak Tiwari is said to be doing much homework in preparation for it. Isn’t it exciting? She is unquestionably one of the most prominent new Bollywood stars! So, which Bollywood debut has piqued your interest? This new actress will make her Bollywood debut very soon, and we can’t wait to see her in action.

They are all trendy on social media for their style and, fashion sense, glamour, and we are sure they would receive the same love from fans for their acting. What are your opinions? We love hearing from you!