Home » Blog » These Bollywood Detective Movies Will Keep You Glued To The Screen! 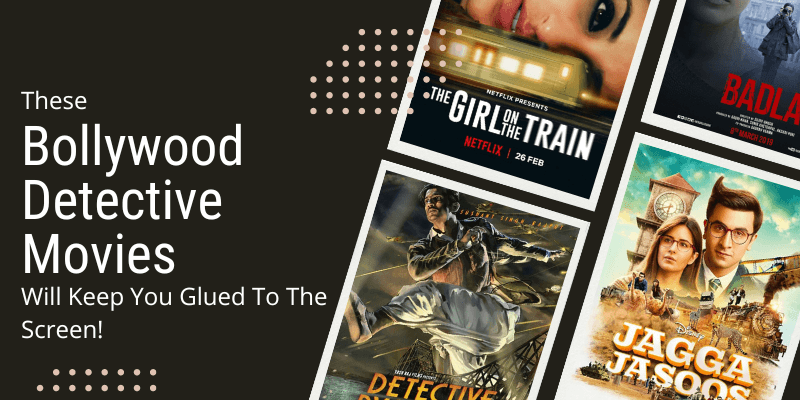 These Bollywood Detective Movies will have you on the edge of your seat! Nothing beats the satisfaction of watching a seemingly intractable puzzle piece itself together by the minute. A good mystery surprises you – with a twist you wouldn’t have seen coming from miles away.

Ugly, one of the best crime thrillers of this generation, tells the story of a kidnapped girl and the inspector determined to find her. Kali is the depressed daughter of Shalini Bose (Tejaswini Kolhapure) and her ex-husband Rahul (Rahul Bhat). Rahul, a struggling actor, takes Kali for a drive, and she is abducted while he is meeting with his agent. When the mother and her current husband, Police Chief Bose (Ronit Roy), learn of the incident, they immediately blame Rahul for staging the kidnapping. However, as Bose investigates the case further, he discovers various threads of deception that lead him to Rahul, his friend Rakhee (Surveen Chawla), and his wife. A heinous tale of greed, betrayal, and fraud.

It is based on the famous Indian TV series of the same name and stars the young and attractive Sushant Singh Rajput. The film tells the story of Byomkesh Bakshi, a recent college graduate in war-torn Calcutta in the 1940s. Byomkesh intends to follow in the footsteps of a criminal mastermind who has been working to establish a drug trafficking ring in his city. When Dibakar Banerjee’s father vanishes without a trace, he gets his first case as a detective. The situation appears to be resolved when he discovers that the victim may have been blackmailing a politician. When both Dibakar’s father and the politician are assassinated, the young sleuth is forced to think in a new direction. He realizes that more sinister forces are at work.

Inspector Surjan Singh Shekhawat and his wife Roshni are shocked and in mourning following the unexpected death of their son. While Roshni expresses her grief openly, Surjan diverts his attention to work, attempting to solve the mysterious death of a famous actor.

Kahaani is, without a doubt, one of Bollywood’s best mystery movies. Vidya Balan plays Vidya Bagchi, a pregnant woman who has come to Kolkata to look for her missing husband. Satyaki Sinha, a friendly police officer, decided to assist her in her pursuit. Vidya claims her husband was in Kolkata on official business for the National Data Centre when he vanished. NDC’s head of human resources informs her that her husband’s description matches that of a former employee, Milan Damji. After a wild goose chase, the story finally comes to a close. This Bollywood Detective Movie should not be missed!

Raat Akeli Hai is a suspenseful murder mystery directed by Honey Trehan and starring Nawazuddin Siddiqui and Radhika Apte. The plot revolves around Jatil Yadav (Nawazuddin Siddiqui), an investigator looking into the death of an elderly and wealthy politician who was discovered dead on his wedding night to Radha (Radhika Apte), a young girl. As Jatil Yadav continues his investigation, he delves deeper into a much darker unresolved case, putting himself in danger. This film is so captivating that you will be hooked from beginning to end. And special mention should be made of the entire cast of this film, who performed admirably. If you like dark crime films, Raat Akeli Hai is the one for you.

Following the brutal murder of the Talvars’ daughter and servant, an investigator investigates the various aspects of the case, with new complications arising when it appears that the grieving parents are the prime suspects.

Bagchi vanishes from his life after enrolling his adopted son in a boarding school. When the son, Jagga, reaches adulthood, he embarks on a journey to find his father with the assistance of a journalist named Shruti.

The Girl On The Train

Mira, a recent divorcee, takes the train to work every day. Every day on her way to work, she passes a couple and fantasizes about their lives. However, things go wrong one day.

Drishyam, directed by the late Nishikant Kamat, is about a family trying to cover up a murder. Vijay Salgaonkar is a Goan businessman who operates a cable TV service. He is the father of two daughters, ages 18 and 12. Sameer, a classmate of his elder daughter Anju, is sexually harassing her. During a scuffle, Anju accidentally kills Sameer. The family will go to great lengths to conceal the murder. Sameer is also the son of the Inspector General of Goa Police. The film concludes on a bittersweet note, emphasizing the importance of family.

Badla, starring Tapsee Pannu, Amitabh Bachchan, and Amrita Singh, is one of the best mystery thrillers, full of unexpected twists and turns. Naina Sethi (Tapsee Pannu) is a businesswoman accused of murdering her lover Arjun (Tony Luke). As the story progresses, we see every side of the characters in the film. And we bet you won’t be able to figure out whether Naina Sethi (Tapsee Pannu) is the real culprit or not. Not only did the main characters perform well, but so did the supporting characters.

A city-bred cop is transferred to a rural area, where he discovers severe caste discrimination and violence against oppressed castes. Despite the lack of systemic support, he decides to strike back.

Jolly is a struggling lawyer who is eager to establish himself. He accepts a hit-and-run case and decides to represent the victim. However, the wealthy defendant hires a reputable lawyer, Rajpal, to represent him in court.

A CBI officer seeks the assistance of a convict in locating a religious fanatic responsible for a string of child abductions.

India’s James Bond is Agent Vinod. Okay, that’s a little far-fetched. Let’s call him James Bond’s keen cousin twice removed. Is that correct? So, Agent Vinod (Saif Ali Khan) is a RAW agent dispatched on a global mission to discover who murdered his friend and fellow RAW agent. On the way, he meets Ruby (Kareena Kapoor), a British-Pakistani undercover agent for the ISI. Vinod then discovers that the terrorists intend to secure a nuclear device and its trigger, which will be used for their nefarious purposes. Agent Vinod now has his work cut out for him: he must figure out who is behind this scheme and how to prevent them from obtaining the nuclear device.

This is possibly Bollywood’s first origin story, describing the beginning and progression of a character who has already been introduced in a series of films. It is a prequel to the 2015 film Baby, starring Akshay Kumar and Taapsee Pannu, and follows the background journey of an undercover spy named Shabana Khan (Taapsee Pannu). Shabana is a typical college girl who longs to escape her daily routine of fearing everyone around her. She is even afraid of trusting a man because her father abandoned her as a child.

Shabana’s strategy shifts after a close friend are killed in a freak accident. She accepts an offer to work as an undercover field agent for Indian Intelligence. She is already trained in Kickboxing and is working to improve her fighting skills. However, fighting is not the only requirement for this position. A mentor arrives to teach her what is expected of a spy living an unknown desolate life. As a result, Shabana is born.

Did you enjoy our list of the top Bollywood Detective Movies? Which ones have you seen? Please let us know in the comments!