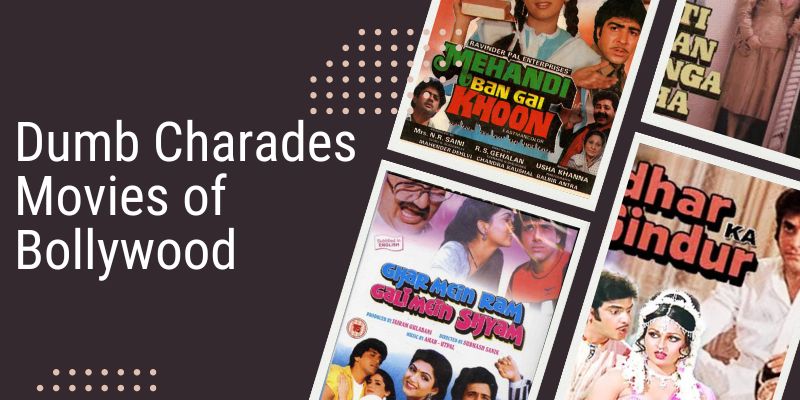 So it’s Saturday night, and you’re hanging out with your buddies. You panic when the conversation runs dry and someone suggests a round of dumb charades movies (aka Damsharas and Dumsharaz, as many of my friends would spell).

We’re here to help you make everyone’s jaws drop with some of the most difficult (and bizarre) Bollywood dumb charades movies, which are impossible to guess and hilarious enough to make everyone laugh.

Here are some of the most difficult and bizarre Hindi dumb charades movies name to help you master every dumb charades game (not Damsharas or Dumsharaz:P).

Whoever thought of this name is a genius. However, before dismissing this one, remember that besides having a great Dumb Charade movie title, this was the first Indian film in which all songs were recorded in stereophonic sound.

The title of the film is also ajeeb. Also, this film is a prequel to the cult classic “Albert Pinto Ko Gussa Kyoon Aata Hai.” Both are ideal for a round of Dumb Charades.

And what about the office? Only Govinda should star in a film like this!

Not if you are Tiger Shroff. But on a serious note, WTF?

Getting a loan to buy sindur? That’s a little excessive! Also, why are there so many Bollywood films about Sindur? Why not use bindi? What about your Kajal? and Your nail polish?

Bachao Bachao! That’s the story of every married man these days.

What do saas and bahu, and how do they relate to the stock market? Keep watching to find out! Aside from the odd name, the film has a great cast of talented actors and focuses on the complexities of finding love in Mumbai, the city that never sleeps.

That was a mouthful. The film’s original title was “Jalaa Kar Rakh Kar Doonga,” but “Paap Ko” was later added.

My and my friends’ lives are told in this story. But, on a more serious note, this film is hilarious!

This title makes no sense. Dara Singh, Mehmood, and Bindu star in this film. However, this is a must-see when you’re drunk, high, or both.

When they see biryani, they call me my squad. The story of a son forced to accept bribes from his father. That is outstanding parenting!

This film was also made available in English. That’s a big deal considering it was 1946.

I mean, what does that even mean? This film, which translates to “Arise from the Surface”, was first shown at Cannes in 1981.

Hello! Kaun? This film was a big hit in Bihar, and we know why.

I like laddus, but not the title of this film. What’s the deal with Laali, Laaddoo, and Shaadi?

This has the potential to be a game-changer. This 2018 Om Puri-starrer Bollywood film would blow any opponent’s mind in a game of Dumb Charades.

Sounds like a very low budget. A slew of extras play the lead roles. Who comes up with these films?

But what if I feel sorry for Salim? This langda is an absolute badass!

Whenever I walk into Zara, the sequel could focus on demonetization.

Also, this is not a Sholay spinoff. But the story sounds suspiciously similar to Basanti’s.

WTF! The poor actor would not know whether the words were in Hindi or English.

Yes, you’re Majesty! This 1984 Hindi art film was a satirical look at the legal system.

What is Anaarkali up to with Pehle Disco and now Aarah? This 2017 film starring Swara Bhaskar has received critical acclaim.

My Life, My Decision! This Rajshri Bollywood film from 1977 was a surprise hit.

Antara Mali, on the other hand, could never become Madhuri! However, with this movie name, you could probably become a Dumb Charades Champion.

It is not easy to guess the names of people in titles! That’s an important Dumb Charades rule to remember.

What and who? This is one of the lesser-known Tarzan-inspired films from the 1960s and one of Bollywood’s first sequels. Zimbo, the first film, was released in 1958.

This political drama based on former Prime Minister Dr Manmohan Singh’s tenure is also one of the best Hindi dumb charades movies.

For those unfamiliar, Kaalakaandi is a Marathi slang term that means “when everything goes disastrously wrong.”

These Bollywood dumb charades movies will impress your friends at the next beer-fueled dumb charades championship. And maybe you can watch one of these movies for laughs after that!

We’ve added to the list that will undoubtedly challenge your opponent.

Here’s another dumb charade movie that will make you and your group laugh as you watch your fellow player act.

Why? Why are they after Pasina? Do they want their perfume supplies to run out? Or, if they take showers, what happens to their water reserves? But don’t stop there; check out the full list of good movie titles for playing charades, and I guarantee you won’t be beaten this time.

A dead man cannot die. So make sure you don’t die during the game while performing this one. This movie on the damsharas movies list bollywood has helped me win many games.

This is one of the few movie names for dumb charades on this list that isn’t particularly amusing.

Looking for movies about stupid charades? Sitaron se bhar doon teri mang Asmaan sindur se. It makes perfect sense, which is why it will help you win.

With a love triangle as a plotline, this movie title is not that strange after watching the movie. However, acting out the entire name will take some time, especially if no one knows about the movie.

It sometimes feels like someone was venting their rage, and in the movie, people just took a random part of the dialogue and used it as the title.

Even though the title is not overly serious, if you dig deeper, the title and the film revolve around a very serious social issue known as Dowry. Therefore, this must be one of the most difficult Bollywood film titles. Did you know these films existed? Now, use them in your game, and if the opposing team claims these films do not exist, show them this list. If you want to keep winning the game, you can do so! So, the next time you play Dumb Charades; don’t forget to use these not-so-insignificant gems to win the game. Continue to play and win.