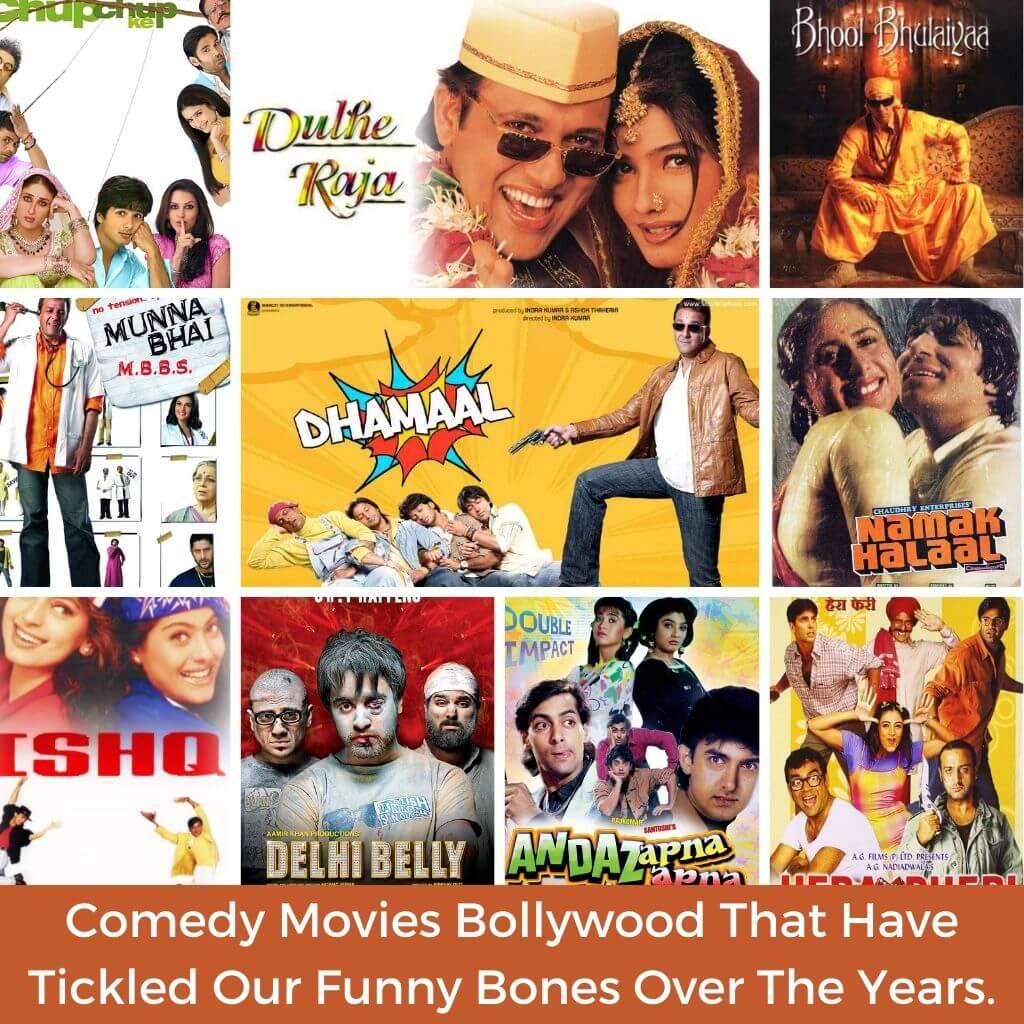 In India, comedy films are classified as “family films.” There are no points for guessing that they do extremely well at the box office. So much, so that romantic and comedy films were equally popular. While most comedy films today are ‘escapist,’ some old gems from back in the day had impeccable storylines.

Nonetheless, good comedies are still made today. Life is too short to be gloomy and intense all of the time, so if you’re looking for some laughs and LOL moments, look no further! This list of the Best Comedy Movies Bollywood of all time will be your best happiness booster.

Munna Bhai MBBS will be remembered as one of the most iconic characters of the modern era. Sanjay Dutt’s endearing gangster persona played a role in Raju Hirani’s first film, serving as his breakout. Whereas Vaastav’s Dutt in Munnabhai was a more career gangster, Hirani goes for the opposite effect, playing it for laughs. Hirani also turns Vaastav’s Mother India syndrome into daddy issues in Munna bhai and continues on this path in subsequent films, most recently in Sanju.

With Sanjay Dutt in comic mode, you’ve already won half the battle as a filmmaker. Dutt plays Munnabhai, a good-hearted goon who enrolls in medical college to become a doctor and is helped through the good and bad times by his sidekick, Circuit (Arshad Warsi). “206 type ka sirf haddi hai insaan ki body.” “What time is it today?” Munna bhai imparts his newly acquired knowledge to Circuit, who later sends an “imported body” to his boss for medical dissection.

The Dutt-Warsi bromance, combined with Hirani’s jaadu ki jhappi formula, results in a fresh and funny film that riffs on its leading actor’s tapori image and combines clean humor with Hirani’s brand of cinema. Hirani resurrects Gandhi’s ghost in its highly conceptual sequel Lage Raho Munna bhai a few years later to give us a new buzzword. Gandhigiri this time.

Raju (Akshay Kumar), Shyam (Sunil Shetty), and Baburao (Paresh Rawal) are well-known characters. Their wretched schemes to make quick money are always entangled in a tangle of their stupidity, lack of coordination, and multiple groups of antagonists. Every generation has grown up watching these.

A tangled plot in which a father-in-law falls in love with his son-in-law dressed as a lady. This is a wild ride. Although Robin Williams’ Mrs. Doubfire heavily influenced it, Kamal Hassan gave his all to this endearing comedy.

Amitabh Bachchan could communicate in English, walk-in English, and laugh in English. Mr. Bachchan and a fly were all it took to keep the audience laughing in an era when CGI was non-existent, at least in Hindi cinema. There were also the usual masala movie tropes. This was similar to Deewar but with more intense comedy from Shashi Kapoor and Amitabh Bachchan.

This is by far the most daring Bollywood journey you’ll ever take. You won’t want to miss this one, in which a young Amitabh Bachchan exchanges comedic notes with Mehmood in top form. The set pieces involving endless eccentric characters were popular.

A witty and action-packed story about two struggling roommates and a ruthless gangster. A donkey humping an autorickshaw was as amusing as Delhi Belly.

This multi-starrer from the 1990s is classic comedy that can be watched and re-watched a million times without getting tired. In terms of a linear storyline, summarising this Rajkumar Santoshi con is akin to explaining how Aamir Khan scored that goal for Mohan Bagan with sherbet glasses. One of the drinks has been spiked, and he’s only recently regained his memory.

To add to the confusion, either the goal was highly strategic or, more likely, he made it up. To Salman Khan’s bumbling Prem, Aamir plays the ne’er-do-well Amar. Paresh Rawal, aka Teja, obviously dismisses them as “filmy and slackers.”

From the moment you meet them as imposters in an endless game of one-upmanship trying to outwit each other, it is clear that this journey will not end well for them. However, it does. (One loser tempts away a millionaire’s daughter) And the whole thing is a complete farce.

Andaz Apna Apna belongs to the quick-witted Aamir, perhaps because he was given a central role because he was a bigger star at the time. However, it’s incomplete without the collective madness of Salman Khan, Shakti Kapoor, Raveena Tandon, Karisma Kapoor, and Mehmood (his Wah Wah Productions’ gag is an homage to Pyar Kiye Ja), Jagdeep, and Paresh Rawal in (He’s the one with the blemish on his cheek.)

The plans of four friends—Hunny, Choocha, Lali, and Zafar—who want to make quick money are disrupted by unexpected characters and unfortunate events. A fresh take on urban middle-class youth, with some truly hilarious moments and a promising performance from the entire cast.

Unpopular opinion: this is the Kareena-Shahid duo’s second-best film after Jab We Met. This film is as witty and hilarious as a Priyadarshan film can be!

As the title suggests, this film is a hysterical tale of three theatre performers running around in a labyrinth of murder and mishaps. Three comedy kings—Paresh Rawal, Govinda, and Akshay Kumar—come together for this one, so there’s no doubt it’ll be hilarious.

This one is all about comedy and nothing else! This movie never gets boring or annoying, no matter how many times it is watched. Hungama makes us nostalgic for the good ol’ 2000s comedies without a 100-actor entourage, senseless overlapping storylines, and the bad humor that followed in movies after this era.

This film, possibly the first of its kind, combined comedy and horror in unexpected ways, and we can thank ace director Priyadarshan for it. As much as we laughed at Dr. Aditya and Chhote Pandit’s antics, Monjulika terrified us!

It would be a travesty to call yourself a Bollywood buff and not have seen this film. It’s hilarious to watch Arjun (Big B) and Pyare (Govinda) catch their criminal lookalikes. It’s illogical and hilarious—a complete Bollywood masala film!

Bollywood’s first full-fledged zombie film may not have been taken seriously, but it wasn’t supposed to be! This film is hilarious in the most millennial way, and its adult content is extremely enjoyable.

Govinda has a gift for comedy that appeals to the masses rather than the upper crust. But who knows? In Dulhe Raja, he plays the title character, a smooth-talking roadside dhaba owner.

The script sympathizes with him in the same way that it does with Rajinikanth, Mithun Chakraborty, and other stars with undeniable mass appeal. The glib ruffian who falls for the rich man’s daughter is a typical Govinda character. The rich man (Kadar Khan) lives in a football stadium-sized mansion with massive staircases and circular sofas.

When Govinda is in top form, he can appear to have been born to play that role. Harmesh Malhotra, the director, gathers the other Govinda staples for support. They include Kadar Khan, Johnny Lever, and Asrani, who contribute to making this laugh-out-loud comedy highly enjoyable – even memorable.

Aside from generous doses of romantic- comedy, one of the main attractions of a Govinda film is the music. The popular Akhiyon se goli maare show the star’s free-style dance moves, while the qawwali Suno sasurji, while equally cringe-worthy, is watchable for the same reasons.

Ishq is a 1997 Bollywood film directed by Aamir Khan and starring Aamir Khan, Ajay Devgan, Kajol, and Juhi Chawla. The plot is simple, with old rich fathers and their sons or daughters falling in love with the poor, but the film was full of comedic moments and was a huge hit in 1997.

David Dhawan directed Hero No. 1, which starred Govinda and Karishma Kapoor. The old classic Bawarchi inspired it, but the overall plot was different.

Welcome is a comedy film directed by Anees Bazmee that stars Akshay Kumar and Katrina Kaif and Anil Kapoor, Nana Patekar, and Mallika Sherawat. Despite stiff competition from Taare Zameen Par, the film did reasonably well at the box office.

The comedy genre is not new in Indian cinema, and it has long been one of the most popular. These Best Comedy Movies Bollywood are beautifully crafted and ideal for family entertainment.

This was the complete list of the Best Comedy Movies Bollywood. Please share your favorites in the comments section. We will keep the list up to date!